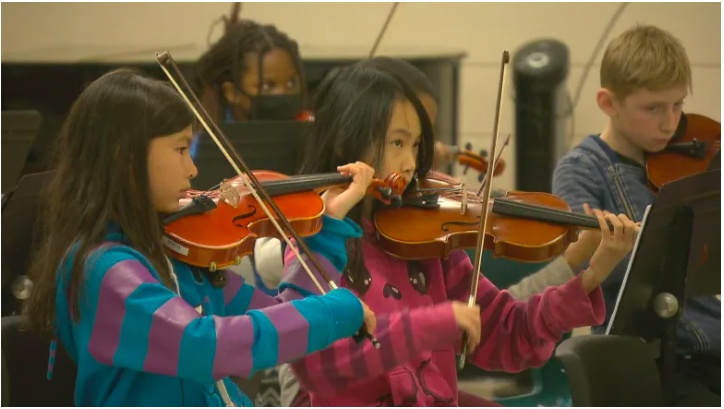 Sistema is a free, after-school music program for children that was started by the New Brunswick Youth Orchestra in 2009. (Pierre Fournier/CBC)

The program currently serves 1,100 children for 3 hours a day, 5 days a week

New Brunswick is alive with the sound of orchestral music, and that sound will be growing.

Sistema is a free, after-school music program for children started by the New Brunswick Youth Orchestra 11 years ago.

The children learn and perform orchestral music for three hours a day, five days per week.

Since Sistema came to New Brunswick, it has expanded to nine centres across the province.

At the funding announcement Tuesday, Ken MacLeod, president and CEO of the orchestra, said Sistema is the largest youth music program in Canada.

He said he is grateful for the government's trust in Sistema's vision.

"This is not an expense," said MacLeod. "This is an investment in the lives of our children and in the future of our province."

"One way we can do that is by removing barriers, encouraging participation among students and by helping children gain the proper skill to enhance their future," said Hogan. "And well, the Sistema New Brunswick after school program does just that."

Sistema is modelled on a program in Venezuela that began 40 years ago and is now a global movement.

How it all started

MacLeod said Sistema started when his daughter auditioned for the New Brunswick Youth Orchestra in 2002 and got in. He became a parent volunteer and said he was able to see how much the 70 kids were benefiting from it.

"I began to think, 'why just 70 kids?' For four decades, the NBYO was about 70 kids," said MacLeod. "What about all those kids who were left out of opportunity? What about them?"

So in 2009, he started Sistema at a single location in Moncton, with one teacher and 50 kids. MacLeod said he called it "madness and chaos" because one teacher in a room with 50 kids learning violin, viola and cello was just that.

But they adapted and modified their program over time, and now MacLeod said they serve "under-resourced" children in urban and rural areas in both French and English. He said they also employ 58 teachers.

"We've become a respected leader not just at home, but internationally. I think that's pretty awesome right here in New Brunswick, isn't it?"

MacLeod said investing into the program is "transformational" for the children, the communities and the province.

With the funding, which is payable over the next four years, MacLeod said the number of children in the program will jump to more than 2,000 kids.

"But if we provide opportunity, through their own hard work and effort, they can achieve at the highest levels. Our kids are counting on us. We don't want to let them down."